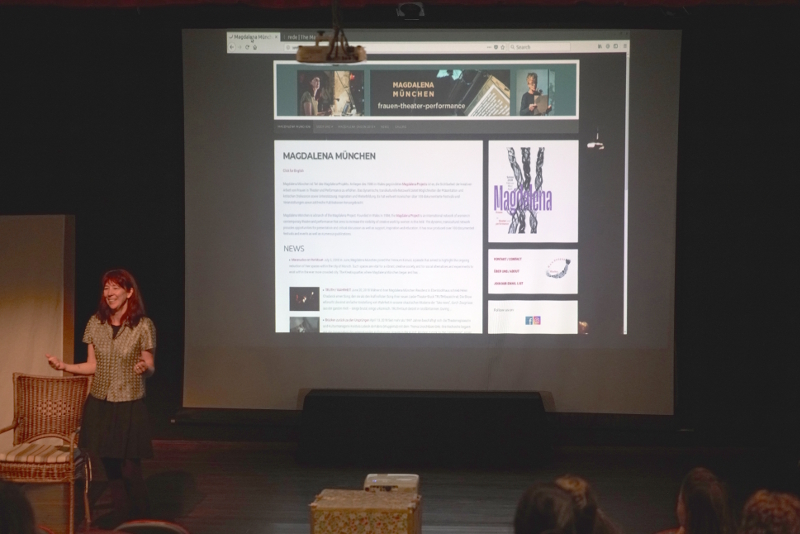 In July I attended Solos Ferteis, a Magdalena festival in Brasilia, with the support of the Kulturreferat Landeshauptstadt München. This was the third edition of the festival, organised by Luciana Martuchelli and her team in Brasil’s capital city. I gave a presentation about our Magdalena Saison in Munich, and showed a work-in-progess performance. 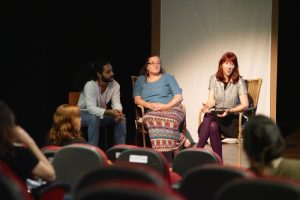 As usual there were many familiar faces to catch up with, including Jill Greenhalgh who was with us in Munich in April and Violeta Luna who performed at Magdalena München – In Between in 2016. Everyone was very interested to hear about the season and in particular the residencies at the Villa Waldberta. I had many conversations about it over meals or on the bus, and on the penultimate day of the festival I gave a presentation together with Jill. Jill spoke about how Magdalena festivals are initiated and organised – that there are no fixed rules, but an organiser should have attended at least two other Magdalena festivals as a participant before organising their own, and that plenty of guidance is offered by the network. Then I spoke about Magdalena München Saison 2018: how we came to the idea of a season rather than a festival, how it was funded, the residencies at the Villa Waldberta, and the many outcomes that are already visible. 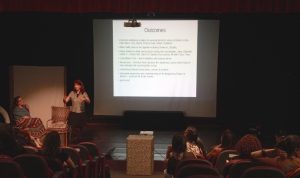 There were many questions from the audience: how had we managed to do everything when we didn’t get all the funding that we needed? How does one get invited to a residency at the Villa? and when are we going to do another season – or what are we going to do next? That last question was the most difficult to answer! There was also discussion about organising Magdalena events generally, and there were several in the audience who have organised Magdalenas in their own locations, so a wide variety of examples and contexts could be discussed. Often in tight festival schedules there isn’t enough time for this kind of discussion, so it was very useful to have.

Following the forum I gave my work-in-progress presentation, ably assisted by festival participants Janaina Matter, Andrea Copeliovitch and Alejandro, and the theater technicians. Under the working title “That’s enough now”, I am drawing together themes from several previous performances centred around waste, consumption and disposability, and moving to focus on the environmental cost of digital technology and the internet. Some fun facts: almost 5 billion (5,000,000,000) videos are watched on Youtube every day. Watching one hour of video a week uses the same amount of electricity as two new domestic fridges. Most of the electricity used in the world’s data centres comes from non-renewable sources. With this performance I hope to make people more aware of the real, physical costs of what we think of as free, intangible and environmentally friendly.

Outside the packed festival programme of performances, workshops and forums, highlights for me included the food (at an open air organic vegetarian buffet-style restaurant), intense one-on-one conversations on the bus (Brasilia is very spread out, so every day we had several bus journeys of around 30 minutes each), speaking German with Veronika Moraga from Chile (her German is way better than mine!), discovering pão de queijo (yummy little puffy cheese breads) and visiting the beautiful modern cathedral.

Thaís Medeiros invited me to visit her in São Paolo on my return journey, so I stayed there for three nights and it was great to catch up with her, Ivan and Ulysses again. They showed me parts of the immense city, including the chaotic, noisy, crowded downtown (about as different from empty, quiet Brasilia as possible!) and the massive Paulista Avenue with its shiny new galleries. Thaís had also organised a presentation evening at the Goethe Institute, who funded her travel to Munich. She presented a short version of Tapete Manifesto, I spoke about my work and Magdalena München, and Christiane Gomes, from the Rosa Luxemburg Institute and the African-Brasilian collective Ilú Obá De Mi, also made a presentation. After this we screened the Magdalena documentary. It was a long evening, but nearly all of the audience remained to ask questions at the end. The staff at the Goethe Institute were very welcoming and happy to learn more about the Magdalena Project and Thaís’ residency at the Villa Waldberta. 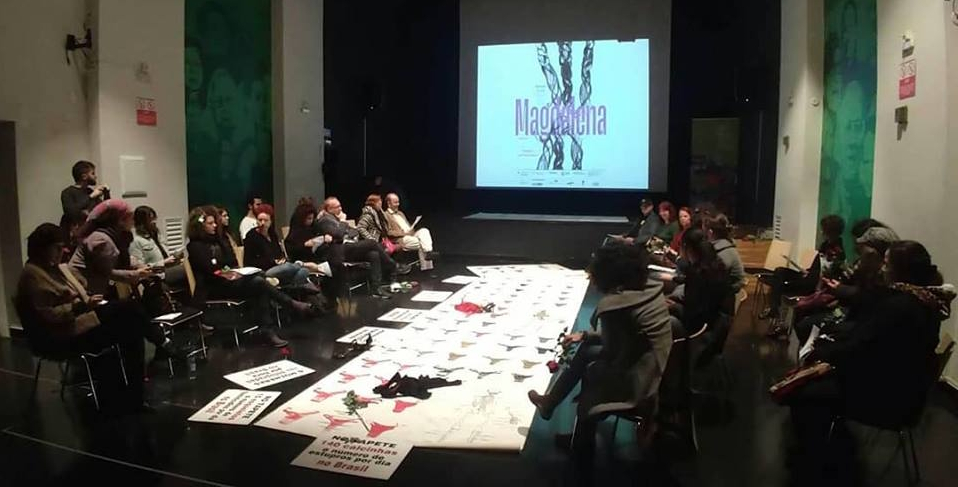 Overall, it was a very worthwhile trip to make, particularly to strengthen Magdalena connections between Brasil and Munich. There is definitely possibility for further collaboration with the support of the Goethe Institute in Brasil. And many Magdalena artists would of course love to come to the Villa Waldberta! Now I must turn my attention to the two remaining reports on the season that need to be finished, and think about going to Frankfurt, where Barbara Carvalho (coincidentally also Brasilian) is organising her second Magdalena event at Antagon Theater in the last weekend of September.

← Macanudos on the Move!
The Magdalena Project at the IETM →